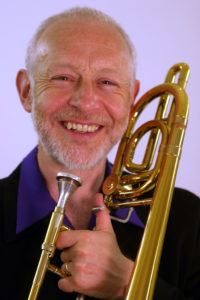 Trombonist and composer John Kenny is internationally acclaimed for his interpretation of contemporary music, having performed and broadcast in over 50 nations to date. He also works extensively with improvisation and early music and is particularly active in collaboration with dance and theatre. In 1983 he began his long collaboration with playwright Paul Stebbings and the TNT Theatre Company performing, composing and directing music for productions which continue to tour worldwide including Cabaret Faust, Tempest Now, The Wizard of Jazz, Moby Dick, Moon Palace, The Taming of The Shrew, Romeo and Juliet, The Mystery of Edgar Allan Poe, The Ghost of Illiam Dhone, The Wave, The life and death of Martin Luther King and The Merchant of Venice. He has also received commissions from London Contemporary Dance Theatre, Huddersfield Contemporary Music Festival, the International Trombone Association, Scottish Chamber Orchestra, Edinburgh Contemporary Arts Trust, Chamber Group of Scotland, Dance Umbrella, St Magnus Festival, BBC Proms in The Park, American Drama Group Europe, The New Haven International Festival of Arts and Ideas (USA) the Festival d’ Angers, (France), Vokal Nord (Norway), CCMIX Institut (France), the Swedish Arts Council, Spanish Brass and the city of Wroclaw (Poland).John is a professor at both the Guildhall School of Music and Drama in London and The Royal Conservatoire of Scotland. He has lectured and performed at many of the world’s leading institutions, including Juilliard, Manhattan, Peabody and Eastman colleges in the USA, and the conservatoires of Paris, Angers, Angouleme, Bordeaux, Perpignan, Den Haag, Wroclaw, Gdansk, Moscow, Helsinki, Tromso, Munich, Berlin, Cologne, Stuttgart, Hannover, Sofia, Athens, Madrid, Seville, Porto, Tokyo and Beijing.

Since the early 1990’s he has also become increasingly involved with musical archaeology. In 1993 he became the first person for 2000 years to play the great Celtic war horn known as the carnyx. He now lectures and performs on the carnyx internationally in the concert hall and on radio, television and film. He has performed his composition “The Voice of The Carnyx” to an audience of 65,000 in the Stade De France, Paris and premiered his “Wild Stone” for alto flute and carnyx, during a month long lecture recital tour of the USA. He has released nine solo CD albums on the British Music, Brass Classics and Delphian labels, and in 2017 produced a limited release CD & DVD duo album, Secret House, with Emily White.

John Kenny is a founder member of the European Music Archaeology Project (EMAP) with whom he has worked to bring to fruition the reconstruction of many lip reed instruments of antiquity, including the magnificent Tintignac Carnyx, recently discovered in the Correze region of France, and the Etruscan litus and cornu. In 2017 he was recipient of the International Trombone Association Lifetime Achievement Award – only the 2nd British trombonist to have achieved this honour. 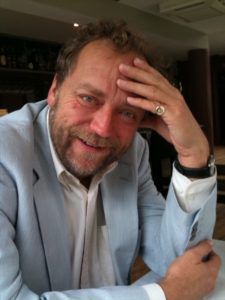 Ian Ritchie was born in London in 1953. Early on, he decided to pursue a career in music and was already active as a solo singer and an organiser of concerts during his schooldays. He was pre-elected to a choral exhibition at Trinity College, Cambridge, and meanwhile entered the Royal College of Music where he won the Mario Grisi Prize for first-year singers. After graduating from Cambridge in Law and Music, he studied singing at the Guildhall School of Music & Drama. His planning and organisational leanings overtook his singing ambitions and in 1976 he was appointed Promotion Manager at Universal Edition, the renowned publishers of 20th century music.

In 1979 Ian Ritchie was appointed General Manager of the Richard Hickox Singers & Orchestra, soon afterwards rebranding the latter as City of London Sinfonia. In 1983 he took on the additional post of Artistic Director of the City of London Festival, performing the roles simultaneously until 1984, and also joined the Music Panel of the Arts Council of Great Britain. He spent the following nine years in Edinburgh as Managing Director of the Scottish Chamber Orchestra, winning the ABSA/BP Arts Award for making the most imaginative use of sponsorship in 1990 and the Prudential Awards for Music and for the Arts in 1991. During this time he was Artistic Co-director of the St Magnus Festival, Orkney, for five years and Chairman of the Association of British Orchestras for two years until leaving Scotland in 1993 to become General Director of Opera North.

From 1994 Ian Ritchie took on a variety of freelance and pro bono roles, mainly in England, Scotland and Bosnia-Herzegovina, specialising in artistic direction and assessment, project design, leadership recruitment and organisational development in the fields of musical composition, performance, education, therapy, integration (for the disabled) and humanitarian aid (in areas of conflict). During this period, as the director of a new Festival in the Highlands (1994-6), he worked with John Kenny and the carnyx on a project which led to their setting up of Carnyx & Co. Meanwhile he has worked in advisory capacities for all the UK Arts Councils, the British Council, NESTA and a number of music charities including Society for the Promotion of New Music (now part of Sound and Music), Opera Circus, Tenebrae Choir and Music Action International. He is joint Chair of MAI, which works with refugees and asylum seekers through music and which, in 2016, won The Guardian Charity Award.

Ian Ritchie spent a year in Orkney directing the 2005 St Magnus Festival, during which Clarence Adoo made his first appearance on a concert platform with professional colleagues since his accident ten years earlier, performing a new work by John Kenny on his specially developed Headspace instrument. Ian returned to the City of London Festival as its Director in 2005 after a gap of 21 years: in 2011 his Festival made a special feature of new instruments and opportunities for disabled musicians, building on the Headspace and Skoog initiatives (the latter developed more recently in Scottish schools, with funding from NESTA); in 2013 he will step down from the City of London Festival.

Since 2010, Ian Ritchie has assumed the Artistic Director roles for both The Musical Brain (exploring frontiers of music, science and medicine) and the Setúbal Music Festival (Portugal). He has also found time to chair the editorial board and the steering committee for the Choirbook for The Queen, a collection of 45 new anthems which was presented to Her Majesty in 2012. Ian returned to the City of London Festival as its Director again in 2005 and curated it for a further eight years until stepping down in 2013: in 2012, his programme placed a special focus on creating a ‘level playing field’ for disabled musicians and the use of new instruments, building on the Headspace and Skoog initiatives with which he had been connected  (the latter having been initially developed in Scottish schools, with funding from NESTA).